Fruity Chutes Automatic Trigger will automatically eject your parachute in case of a failure!

This product has been retired!  Please see the Sentinel Automatic Trigger System which replaces the Mayday.

Fruity Chutes Automatic Trigger using the Mayday Failsafe will automatically eject a parachute in case of a drone malfunction. The device is primarily made for agile multicopters, at this time it's not clear if it's suitable for fixed wing systems.  The device uses a IMU (inertial measurement unit) and barometric sensor to detect if the drone is falling, or flipping.  The Mayday responds quickly to a failure and will eject the parachute typically after falling just 15 ft.

Much of the information to support the Mayday can be found at Maydayboards.com.  The Mayday comes with a quick start instructions that is useful for setting up the Mayday for use. 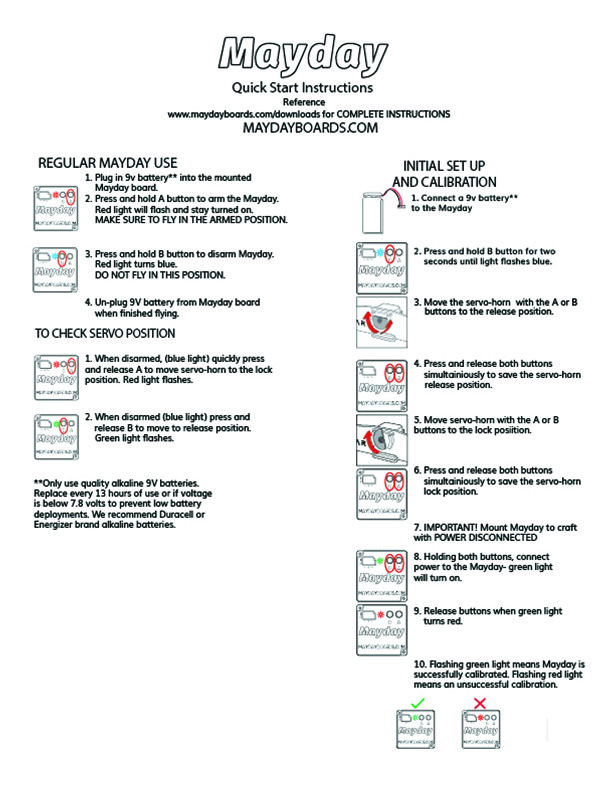 The information below helps to augment this information and assist in using this device with Fruity Chutes products.

IMPORTANT - Mounting the Mayday: The Mayday board needs to be mounted with at least one of the primary axes aligned on the vertical axis.  THE MAYDAY WILL NOT OPERATE CORRECTLY UNLESS MOUNTED THIS WAY!

Mayday operation: While the quick start guide included with the Mayday helps you with most operations it can be a little confusing.  Here is the Interface Flow chart from Mayday boards that can help with use. 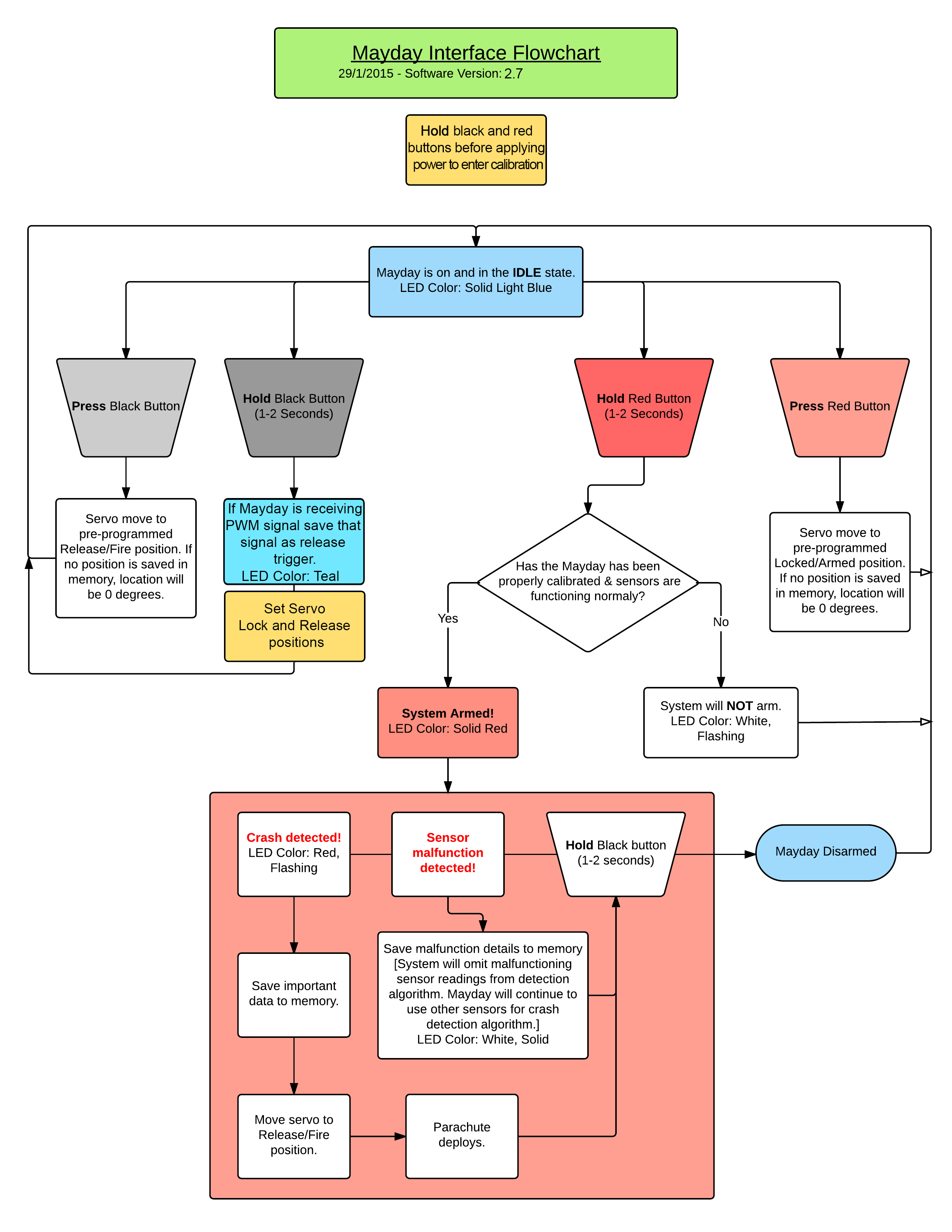 Tip: When using the Mayday and after the Parachute Deployment event you need to explicitly disarm the Mayday.  Until you do this you will not be able to re-arm the Mayday or do other functions.

Note: Once the Mayday is armed the Mayday will stay armed between power cycles. You do not need to disarm and then rearm the Mayday between flights.

Calibration: When calibrating the Mayday make sure the drone is in the same orientation as in flight!  You can not arm the Mayday unless calibrated.  Calibration can only be initiated by applying power while pushing both buttons.  Once the Mayday powers up and you see the lights flashing and you can release the buttons and the calibration will continue.  At the end you will see a bright flashing green light, and then go to Idle (bright blue light).  If there is a calibration error you will see the red light, and there is a separate little red "error" light on the Mayday board near the center.  Do not fly if the red error light is on.

Once calibrated no combination of button pushes for normal operation will cause you to need to recalibrate.

If you move the Mayday to a new copter be sure to recalibrate it in case the position has changed.

The Mayday firmware 2.7 that allows the Mayday to be used with the Skycat parachute trigger.  The default firmware only produces the servo pulses for the time needed to move the sweep arm from one position to another.  This is done to save battery power and works well for mechanical servos.  However this will not work for the electronic servo switch used in the Skycat trigger or other similar devices.  All these servo switches rely on the servo pulse sweeping from  approximately 1 ms to 2 ms, or back in order to operate.  The momentary servo operation causes problems for these switches. The firmware has a new feature that allows the servo output to be on all the time so the servo switches work.  The firmware also allows the use of the Mayday with a separate Rescue Radio that can also trigger the parachute ejection.

Setup of External Trigger Detection: Setting up an external trigger is easy.  Connect your radio receiver servo channel to the Mayday power and turn on your receiver (and Mayday) and your transmitter.  Set the transmitter so the servo channel is in the parachute eject position.  Then do the Mayday servo position calibration procedure.  During calibration the Mayday will measure the servo pulse width and save that at the external trigger pulse width.

NOTE: All Mayday controllers shipped by Fruity Chutes will have firmware preloaded and with the servo always on option set, external trigger tolerance of +- 10%!

Update you Software: Most of the information for updating software is provided here: http://maydayboards.com/downloads/.  In order to update firmware you need to install the Mayday PC software on your computer.  To install follow the Mayday 2.1 Install Instructions here.

Version 2.5 and beyond have a assortment of special commands that can be issued from the Mayday PC interface software to enable and configure special features.  See below how to use these.

Once connected you can send these commands

SKYCAT TRIGGER TIP: For use with the Skycat trigger you must use the "Servo Always On" feature or the Skycat trigger board will not properly detect the Mayday output.  The Skycat trigger will activate when the Servo signal goes from left (pulse width less that 1.5ms) to a wide pulse (pulse width > 1.5ms). The default software shipped with the Fruity Chutes supplied Mayday should have this feature defaulted to On so it should be set.  If it seems like you can't activate the Skycat trigger when calibrating the servo positions be sure to make sure this feature is enabled.
Ground Test the Mayday: The Mayday IMU can be easily tested by simply rotating the Mayday off the calibration axis after arming it.  Doing a few rotation while armed will cause the Mayday to trigger.  See the photo album Connecting Skycat Inspire Mount with the Mayday for tips how to setup the Mayday for the Inspire 1, and Inspire 2 drones.  Also the video below.

This shows how to ground test your Automatic Trigger System. In this case we are using the Mavic Pro parachute system to demonstrate this.

Reliable detection of a drone that is falling is a very tricky matter.  Here are some things to consider when using the Mayday failsafe controller:

USE THIS PRODUCT AT YOU YOUR OWN RISK. THE USER ACCEPTS ALL RISKS ASSOCIATED WITH THE PRODUCT
THIS PRODUCT IS PROVIDED AS IS WITH NO WARRANTY IMPLIED OR EXPRESSED