Use these resources to help the user mount the Harrier UAV Matrice 200 and 210 Launcher Bundle.

See Using the SATS-MINI to understand how to use the automatic trigger system. 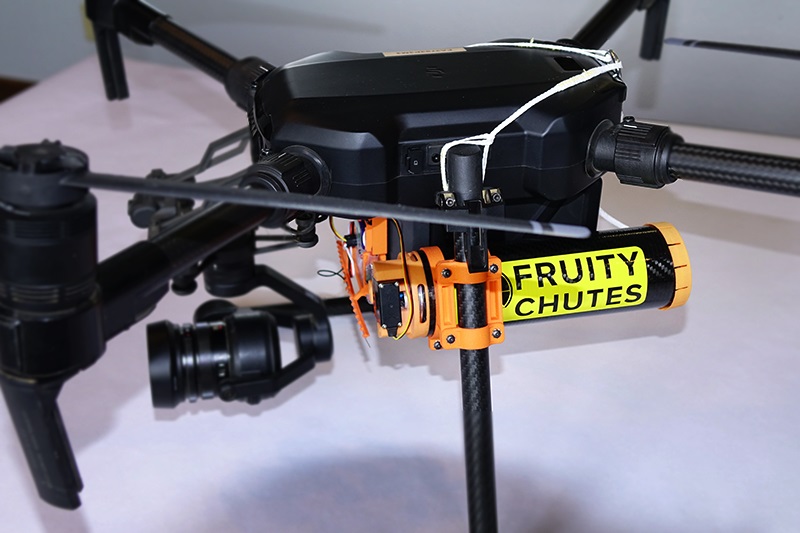 1 — Referring to the photo above, the canister mount is slipped over the landing gear strut and strut clamps are tightened. Position the mount so the canister is next to the battery.  The position will depend on the battery size used.

2 — Additionally, in the photo above, note how the Spectra harnesses are hooked around the landing gear mounts.  These are routed to the back of the copter. 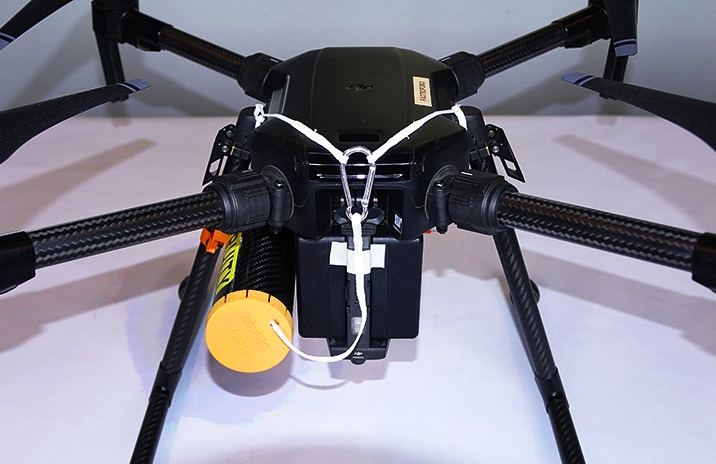 4 —  Use the quick link to connect the shock cord coming out of the launcher to the harness. 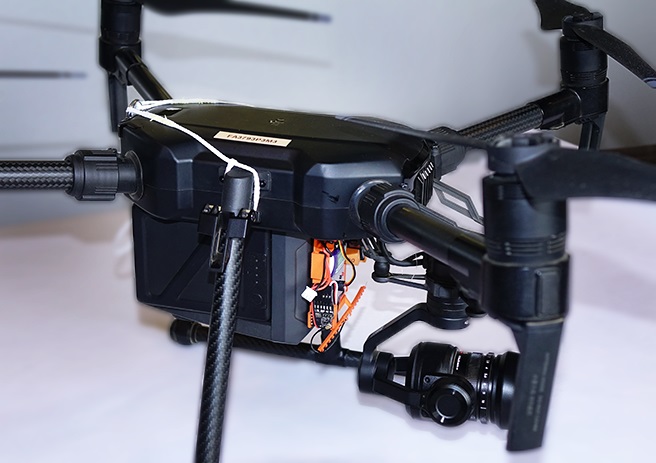 5 — NOTE: The Photo above shows the older Electronics Pack (EPACK) that has the Mayday ATS and the Nano receiver. This has been completely replaced by the SATS-MINI. The SATS-MINI will mount in the exact same place as the EPACK.

6 — Connect the Harrier Launcher servo wire to the open connector on the SATS-MINI Channel 1.

7 — We recommend ground testing your setup. See the SATS-MINI help page on how to can toggle the parachute channel. Should you have it, you may also use the Rescue Radio to eject the parachate.

For the Matrice 200/210, the SATS-MINI is shipped pre-calibrated. If you need to change any setting or the calibration position, see the SATS-MINI help pages.

An extra switch harness is shipped with the Skycat rescue radio.  You can complete the wiring so you have remote ejection switch you can place on the front of your transmitter.

Be sure to setup your Matrice copter options so you can initiate an emergency power cut. This is generally a combined stick function with both sticks down and in, or down and out. Verify that this is enabled. When the parachute ejects, the pilot will need to cut power. Because the harnesses and shock cord are made of Spectra line, the turning rotors should not be able to cut the lines regardless. Additionally, the parachute is ejected about 10 feet out well away from the copter so the rotors can not affect the parachute. Some DJI copters now automatically cut power if the orientation of the copter is not level for an extended period of time.

We sell a device that will automatically stop the rotors in case of the parachute ejecting: https://shop.fruitychutes.com/collections/drone-electronics/products/dji-inspire-2-flight-terminator. Installing this device is very technical, and you may want to have a DJI service company do this. Here is a Google Photo Album of an installation into the Matrice 210 - Matrice 200 / 210 Flight Terminator Retrofit.

If you use the automatic flight terminator, plug the terminator into SATS-MINI Channel 1. Then plug the Harrier servo into Channel 2. Channel 2 is delayed 0.5 seconds to allow some time for the rotors to stop.

When the Parachute Ejects

If the parachute does eject once the copter lands, you can disconnect the parachute and carefully fold and roll it up with the line around it. Avoid tangles. The SATS-MINI is disarmed by pressing and holding the mode button until the status light turns Green.

Contact Us if you have questions or require any help!