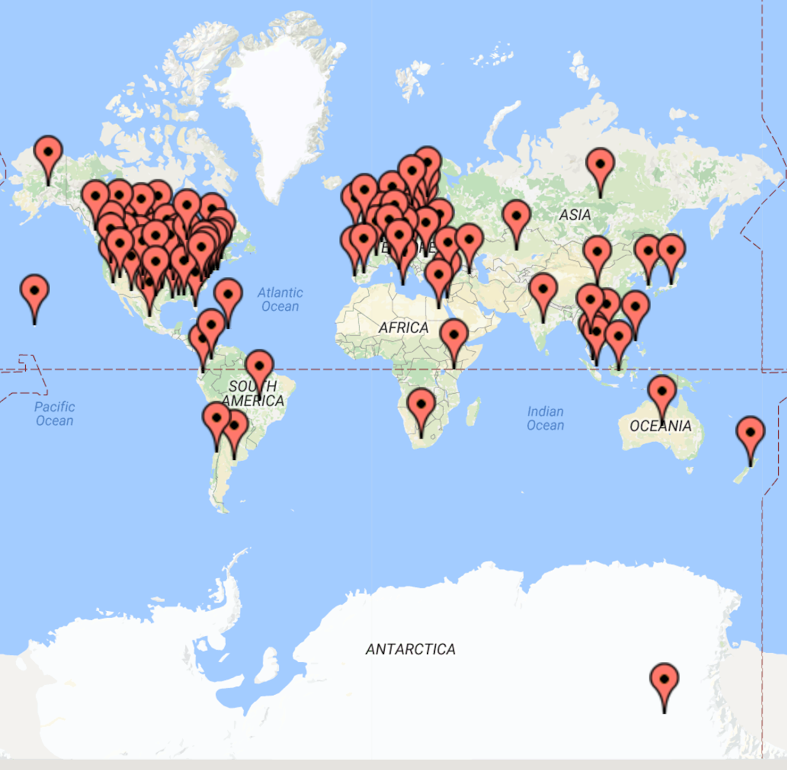 To celebrate their 10 year anniversary Fruity Chutes has decided to pin down where their 3000 customers have come from.

This October marks Fruity Chutes 10th year as the leading UAS parachute recovery manufacturer. When CEO, Gene Engelgau and his wife, Paula, crafted the first parachutes in 2007 their intention was to provide high quality recovery for the high power rocketry community. Fruity Chutes made their first sales at the October Skies Rocket Launch near Fresno, California in 2007. Their booth consisted of a single card table, homemade laminated banner, and a few chutes on display. With the sale of 6 large 10 foot parachutes in two days it was clear that Fruity Chutes would soon become the go-to choice for unmanned recovery.

Knowledge of Fruity Chutes high quality parachutes began to spread. In March 2008 Fruity Chutes received their first out of state sale to a customer in Fairfax, Virgina. And a few months later their growing visibility got noticed internationally. They won their first international sale in Hertfordshire of the United Kingdom in July 2008.

Fruity Chutes has worked tirelessly to improve their parachute systems. Every milestone Fruity Chutes has made has been the result of hard work and passion. The growth of Fruity Chutes has been organic at every step and has been fueled by reinvestment of the profits back into the business, not by outside Venture Capital funding. Their hard work has paid off. Today Fruity Chutes is proud to say that it has customers on all 7 continents, all 50 United States, and in over 55 different countries.

To celebrate their 10 year anniversary Fruity Chutes has decided to pin down where their 3000 customers are, literally. Above is a pin map that features every United State, Canadian state, and country with Fruity Chutes customers. For more info visit: fruitychutes.com